As many have experienced, or rather smelled, the toilet seal on the Thetford toilet can sometimes not work as well as it should, and leak fluids and noxious gases in either direction, which is a very undesirable condition.

I was able to identify the toilet that we have as the Thetford Aqau-Magic Style II, albeit mostly by matching up pictures on the Thetford website.  Switching to Amazon, I found a replacement ball and seal kit that I could get next day on Prime (first time I've been able to use the new free next day shipping service).

Unfortunately, after receiving the kit, which Amazon was kind enough to drop on my front porch, I found that the instructions only cover the Lite and Plus models, not the II.

Fortunately, the lack of instructions is not usually a deterrent for me, so I proceeded with an ultimately successful installation attempt, which I conveniently captured most of on camera.

There's been a lot of interest recently in upgrading to Lithium batteries, which is something I did very early on in the first few months after acquiring my Travato, along with installing a "whole house" inverter between the ATS and the Fusebox.  I knew even less about what I was doing back then, but somehow managed to pull it off anyway.

As mentioned in a previous article, that unfinished and unedited video content was presumably lost along with a hard drive failure last year, but some of it has been recovered.  I'm posting it here in it's raw form for the benefit of those who have a desire to do something similar or just to see what I did.  There has been a few changes, and I'm planning an overhaul, but for the last couple of years I've mostly reliably run on this setup.

Another area for improvement in the Travato 59G bathroom is the difficulty of using the mirror, and the fact that it is rather dark in the corner over the sink.  So I came up with a plan to fix that.

I figured that the large blank area over the sink (above the inset) would be a perfect place to put a mirror. I measured to discover that a 12" high by 24" wide mirror would fit just fine, and was able to locate a plastic mirror of those dimensions on Amazon:

Along with a pack of mirror mounting clips I got from Home Depot:

With this parts in hand, along with some brass screws (variety kit from Harbor Freight) I was ready to install the mirror:

To lighten up the situation, I also added an LED light in the ceiling.  I had first planned on putting a light on the wall above the pump switch, which I thought would be easier to install (it would have been).  But I ended up settling on a ceiling mount light instead, which of course I got from Amazon:

It was a bit difficult to fish wires through the hole in the ceiling I made to mount the light, and then down to the bathroom light switch wiring.  Instead of cutting the existing wire to hook in an extra connection, I made use of these handy splice connectors:

The advantage of these over the conventional auto splicing connectors is that the added connection is a spade - so you can safely remove it later if need be.

Small side step for for front passenger

So this wasn't my idea -- I totally stole it from someone else on the Travato forum on Facebook.  This small pair of self-installable steps are the perfect size (and low cost) to add a step up for the front seats: 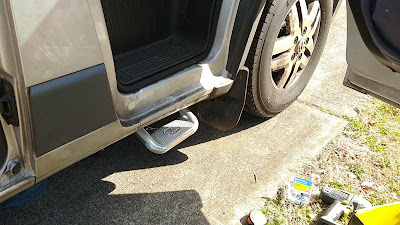 They are aluminum, and come with an assortment of mounting bolts and adapters, all of which I didn't use.  Instead, I put some new holes in the brackets and used some self-tapping sheet metal screws in a #14 size:

These have a length of 1-1/4" but the 1" screws would be plenty long.  Installation was relatively easy, short of getting the first hole drilled.  And make sure you have a proper magnetic drive bit to match the screws if you attempt this - it will make it go much easier.

I've since discovered from a Promaster forum that there is a different version of this step (different manufacturer) with a mounting bracket that looks much easier to install:

It also appears to stick out more, meaning you can get more of a foot on it.  This may be a better option than what I did.
at February 16, 2019

I finally got around to installing my sumo springs last fall.

For those unaware, Sumo Springs are rear bump stop replacements that give you a bit of extra lift, in order to compensate for the extra heavy weight load of all the RV bits and gear loaded into a Travato.  These are made by SuperSprings(.com) and they have front spring spacers as well.

There are a lot of varying reports on the difference in ride resulting from installing these.  There's a measurable several inches of extra height, but the handling change is either hailed as a significant improvement or minimal, depending on who you talk to.  My experience after having them in for half a year now is that I can definitely see (feel?) an improvement -- nothing major, but every little bit helps.  After having just gotten new tires also, I can say that doing both sumos and replacing worn out tires together is a significant difference in handling.

Below is the video of the installation process.  I decided to try doing it with just the stock jack, although partially because I didn't happen to have any better equipment handy.  Both sides are done, with the second side requiring moving the bracket for the grey tank, so it's practically the same except that I didn't try to turn the old bump stop the wrong way on the second side.  In the end, the process was a success.

I broke my pump!

Previously, I've shown you how I used a larger filter to reduce the frequency of cleaning it out to keep the Travato 59G shower drain working.  That worked well, but I was trying to get rid of the small filter (why have both) and I ended up snapping the fitting right off the pump.

Rather than go without showering, I grabbed a small centrifugal pump that I was originally going to be use to recirculate the hot water to avoid wasting water prior to a shower.  I didn't think it would work, since a centrifugal pump is not self-priming -- inotherwords it won't suck the water up the tube by forcibly pushing air through the pump.  The pump would just spin in the air.

Funny thing is, it did work.  And 3 months later it was still working.  The drawback is that the water sits in the bottom of the shower basin for a while before it starts pumping out.  My theory is that the water collecting in the basin will eventually seek level and get back up to the level of the pump on the inside of the kitchen cabinet.  Plus, the pump blades spin at a very fast rate, creating a bit of a differential in pressure to help it along.  Once the water has reached the pump, it empties out pretty quickly.  I've tried switching on the pump prior to showering, and also switching it on once done, and it doesn't seem to make a lot of difference.  Leaving it on means it might get started with emptying out earlier and the water level won't rise as high, but may end up with needing a second time of emptying.  Switching it on once you are done adding water seems to be the best at getting all the water out the first try, although it takes a while (several minutes sometimes) for the water to reach the pump.  Once the pump starts gurgling (a familiar sound when using the original pump) it's emptied out and can be turned off.

This is the "solar recirculation" pump I purchased on Amazon:

I also purchased this matching connector to allow it to be plugged in where the original pump was:

That requires some soldering of course.  In a pinch, you can simply pop the pins out of the connector that the pump comes with, and jam them into the molex pins -- which is what I did while I was dealing with this in the middle of a trip.  Be very careful of course to observe the correct polarity.  On the Winnebago connector side, the white wire is ground and the yellow is positive.  On the pump, black is ground, and the red is positive.  Thus red goes to yellow, black goes to white.

This is a quick video I put together showing how the pump works and how little gunk I ended up having to clean out of it after 3 months of use.  Most of the gunk passed through the pump, with only some getting wrapped around the input side of the pump impellers.


I have some additional pump models I'm going to be testing out, including some that will self-prime and others that are centrifugal but don't have a bearing that is easily damaged in scenarios where hairs get wrapped around the shaft.  Once I'm happy with a solution, I'll put a link here to pre-wired pumps ready to be easily self-installed.